What I Wore | My Most Known Accessory

September 30th, 2008. One of the biggest dates in my life. Without a doubt, the date that helped shape me to the person you know so well today. Yesterday, September 30th, 2018 was the ten year anniversary of my back surgery.

To look at me, you wouldn't know that I have titanium plates and screws in my spine, one missing rib and one killer scar, to boot. And that's where the whole "don't judge a book by it's cover" really comes into play. Just call me a riddle, wrapped in a mystery, inside an enigma.

Let's go back a bit further than ten years, so you get the whole picture. Well, we're not going through everything, because well, it's just boring. I will however say that my back isn't my only fun medical story. But alas, that's a story for another time! When I was in 8th grade, I came home from school and was telling my Mom about my day. I was about to tell her something that one of my friends pointed out when I leaned a certain way, and before I could even say it, she stole the punch line. My back looked rather strange, and one side of rib cage was pushed out a lot further than the other side. Pretty weird. Which led to a doctor's visit to see what was wrong. 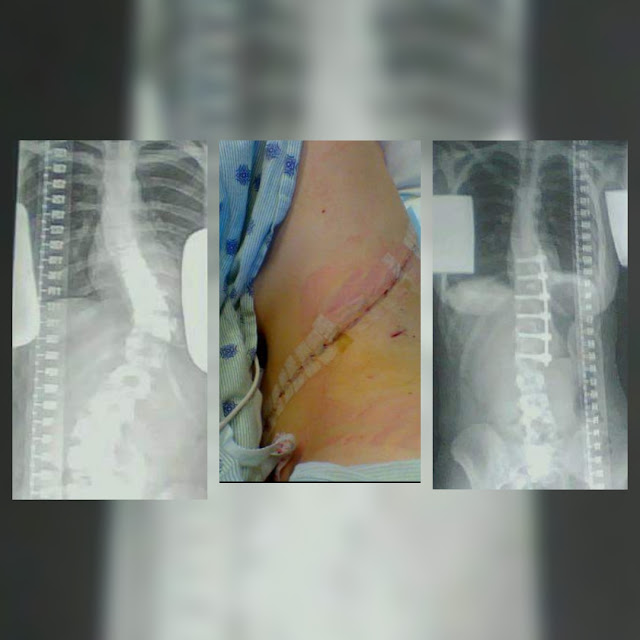 We did the ever classic Scoliosis check. I had that test twice a year, just like the average kid. Once by the school nurse and once by my regular doctor for my physical. Always been a-okay, til now. Turns out, my spine went from being straight to a small S in a matter of a few months. The shift made a big difference in a lot of things, my shoulders were quite a big difference in levelness, my hips were off kilter and rib cage was all out of whack. This then led to a follow-up with a specialist, and being told surgery is inevitable. Being 13, that's pretty scary. My spine was curving at a rate that had no intention of slowing down, and surgery needed to be done.

A few dates were scheduled, and a few were cancelled due to one scary reason or another. Finally, the day was here. You know, not the way the average person starts their sophomore year of high school, but hey, why not be a trailblazer?

The first month of school flew by and the last day of September was here. I went in really early, half awake, had to change into a hospital gown (why are they so incredibly awful, and why has no one made an improvement on them?), and take a pregnancy test. Yep, if the day wasn't already incredible enough as it was, peeing in a cup was sure to make it better. Apparently, they had one person come back positive, so it's always better to be safe than sorry. Which hey, I get it, however it's never a fun time. 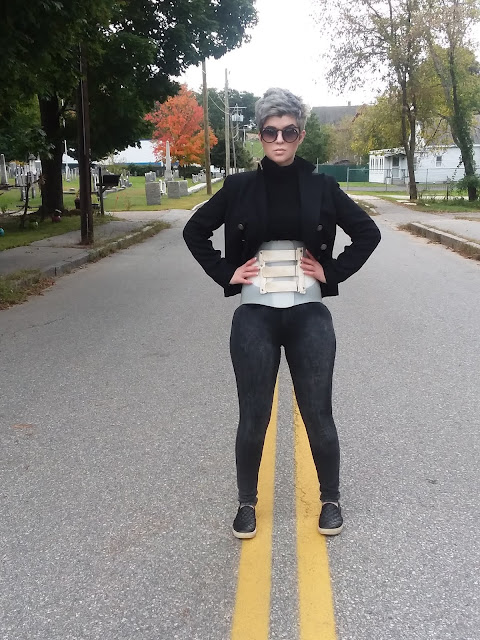 So now was the moment of truth, I get up on the bed, get all comfy and they ask me to start to count backwards. So I do. The last thing I notice? The very nice male nurse with the awesome Prada glasses. We all have our things, don't we? The beginning of my surgery had some complications of me going paralyzed, so they had to stop, then restart it.

After it restarted, the surgery went great, my middle curve was corrected and straight. The top and bottom curve were left alone, with the hopes that if the middle one was fixed it would  pull and correct the other two. Which did happen, thankfully. The downside? It took me quite a long time to come out of it and wake up. When I did it was shortly after midnight on October 1st, my Mom's birthday. What a way to spend the one day that's truly yours. Once I started to come to, I was in the most excruciating amount of pain and was sick to my stomach. I was on two different narcotics, a morphine drip and no anti-nausea medications. Quite the cocktail, and made for a lot of vomiting. A whole lot. For about a week or more straight. Anything I ate never stayed down, and to this day the smell of saline or the taste of room temperature lemon water makes me sick. Needles to say, it was quite the adventure. 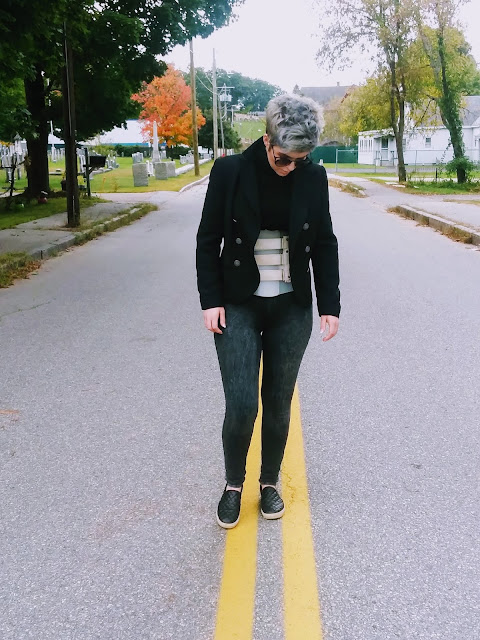 The average person is up walking within a day or two and is there under a week. Me? I was in so much pain that when I walked for the first time, I cried nonstop. I was in the hospital for 12 days, intensive care for the majority of it. From that point on in my recovery, my pain level went from 'just had surgery' to 'in constant pain', and no one knew why. I looked fine. My X-Rays looked perfect. My MRI's looked great. So why was I living in a high level of pain? To this day, we don't fully know why. I was the first person that came out of the surgery in more back pain than when I went in, and beforehand, I never had any.

Of course that led to many different attempts of a solution. Physical Therapy with an emphasis of core strengthening, massages and lastly my brace. I could finally connect with a character from my beloved Brat Pack movies. Little did I know it would be Joan Cusack from Sixteen Candles. That's right folks, I wore a back brace starting my Junior year and continuing on into my Senior. It became my signature accessory and was known as "The Girl with the Back Brace". Doesn't exactly have the same ring to it as "The Girl with the Dragon Tattoo", does it?

Back braces are not even slightly enjoyable. It's like a less comfortable corset. At least those are pretty and fabric, this is hard plastic and rubs your hip bones in the most uncomfortable way. Helpful tip, if you find yourself in a similar situation, sponges covered in really soft socks make a world of difference. In the Winter months, it does hold in heat really well. However that is also it's biggest downfall in the Summer. I didn't have to sleep in it, but I did wear it all day. It was meant to relieve pain, and didn't. And on top of it, it made my back muscles weak. It took quite a while to get the strength back up to where it should be. 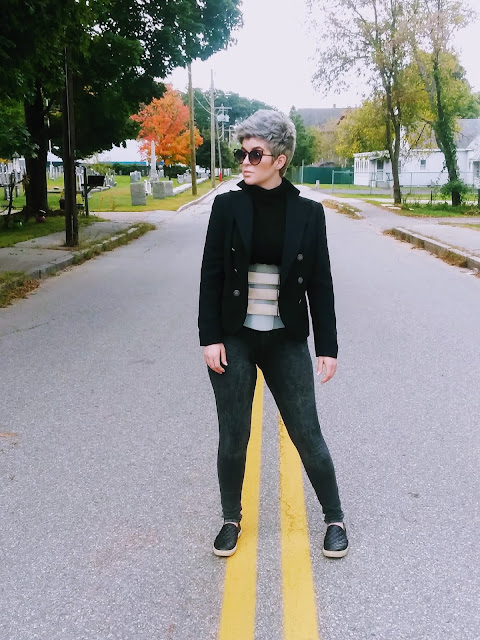 After graduating high school, I went off to college convinced I wouldn't let my back stop me from anything I was going to do. Especially my major in Fashion Design. I definitely didn't realize the physical toll that could take on the average person, let alone someone with a really bad back. The amount of pain I was already in increased significantly and created migraines I was living with almost everyday. During Winter break I went for a 6 month check-up with my doctor in regards to my back. There was a new team since my surgeon moved to the West Coast. After going over all of my notes I was told due to my pain level and my history, I would always be partially disabled and never work a full-time job in my life. That was an incredibly hard day, especially at 18. I was going to a private school, out of state and had a hefty student loan already amounting in my name and was my sole responsibility. I took a few weeks to ponder and decided the right decision for me was to withdraw from school, take some time off and figure out what the next step was. So I did.

Now, ten years later, my scar has sadly faded, I don't wear a back brace and I'm still in pain (thankfully getting better). I work full-time somewhere that I absolutely love, my student loans are completely paid off, we have a house, two pups and I'm married to my best friend. And on top of it, I have this. This corner of the World that is all mine. So thank you for reading this incredibly long story, especially if you have stuck with it to the end!

Thanks for reading!!
Leah xx
Labels: October What I Wore 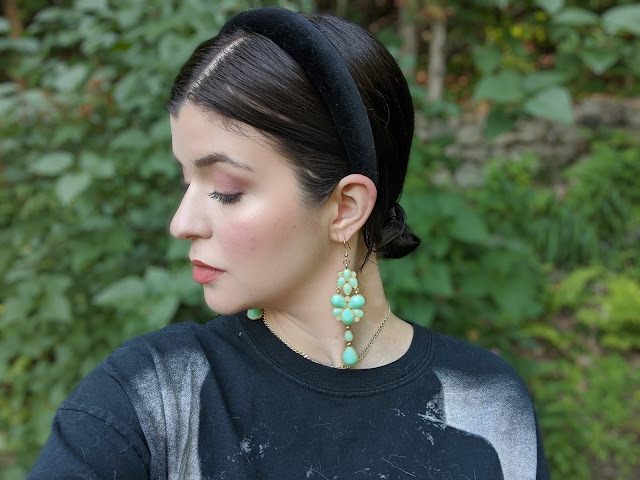